Co-driver Dan Barritt has been ruled out of next Corsica Linea Tour de Course by doctors adn his place will be taken by 2003 World Champion Phil Mills.

Barritt has not recovered from the concussion he suffered when he and Evans were caught out by a series of compressions on the first day at last month’s Rally Guanajuato Mexico earlier this month. Their Ford Fiesta was pitched into a roadside bank and launched into a sixth-gear roll and retirement. Mills, who won the championship alongside Petter Solberg in 2003 and is a 13-time WRC event winner, is a natural replacement for Barritt. Although he hasn’t started a WRC event since 2010, he has been part of Evans’ safety note crew on WRC events for the last five years and is therefore familiar with his compatriot’s pace note system.

Barritt missed the M-Sport Ford World Rally Team’s pre-event test in Corsica, and after a medical check on Saturday, doctors confirmed that he will sit out the French event to focus on recuperating for YPF Rally Argentina (26-29 April).

It won’t be easy without Dan, but his fitness comes first and it’s important that he has the time to make a full recovery for the rest of the season. Phil has stepped in, and I hope that we can push for a good result ,said Evans.

THIERRY NEUVILLE AND NICOLAS GILSOUL ESCAPED INJURY AFTER A HEAVY TEST CRASH INTO A RIVER IN CORSICA ON WEDNESDAY AFTERNOON. 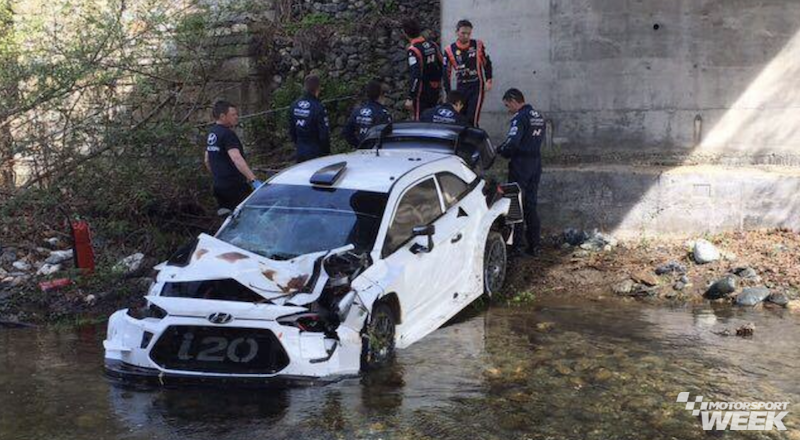 The Belgians were preparing for next week’s Corsica linea – Tour de Corse (5 – 8 April) when their Hyundai i20 plunged off the road at a bridge near Linguizzetta, about 50km south of the rally base of Bastia on the east coast of the Mediterranean island.

It is believed the accident happened at the exit of a left corner. The car came to rest several meters below the concrete bridge in a shallow section of the river, with significant damage to the front and rear. A Hyundai spokesman confirmed that both driver and co-driver were unhurt although the late afternoon accident ended Neuville’s one-day test for the fourth round of the FIA World Rally Championship, eam-mates Andreas Mikkelsen and Dani Sordo tested earlier in the week so Neuville’s shunt caused no further disruption to the Korean manufacturer’s preparations.

A TOTAL OF 92 CREWS HAVE SIGNED UP FOR THE CHAMPIONSHIP’S FOURTH ROUND, CORSICA LINEA – TOUR DE CORSE [5 – 8 APRIL], MAKING THE RALLY THE MOST POPULAR OF THE WRC SEASON SO FAR.